Ultra-low noise, distortion and a wide dynamic range with the Clarett, and record with low latency through amp simulators and effects plug-ins. Decades of analogue circuit design experience, applied around 24-bit/192kHz A-D and D-A conversion, delivers a superior signal path. In addition, the Air-enabled mic preamps can reproduce the input impedance, clarity and frequency response curve of our original ISA mic preamp. Included software is from XLN Audio, Focusrite, Softube, Ableton® and Loopmasters.

The mic pres have been designed specifically for the Clarett range, with plenty of gain, yet low noise and distortion – and great sound quality. They include a special “Air” feature that switches in an analogue model of the classic transformer-based Focusrite ISA mic pre, switching the impedance of the preamp to that of the original ISA, and enabling a ‘transformer resonance effect’, giving your microphone recordings the air and clarity of an ISA transformer-based mic pre recording. In addition, the mic pres have plenty of headroom and are ideal for recording drums and other extreme level sources. 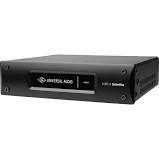 Expandable Processing Power from OCTO. UAD-2 Satellite Thunderbolt OCTO models with 8 SHARC processors, respectively. It can also be integrated alongside UAD-2 Thunderbolt-equipped Apollo interfaces. More cores of processing for larger projects. This unit performs top notch and the modeled software is some of the best in the industry!

The F-2B contains two independent preamp/tone control sections. The amplification is entirely vacuum tube powered. It is normally used as a stereo preamp to interface stereo instruments to power amplifiers. Jacks are provided on the rear for outputs from each channel. In addition a Mono output jack is provided which combines both channels when the F-2B is used with a Mono power amplifier

Most compressor and gates provide less than musical compression, coupled with gating that swallows transients—or closes early, cutting off decay and reverb tails. The superb engineering in the 166XL ensures that both its compression and gating provide versatility and excellent sonic performance in situations where other compressor/gates typically produce undesirable processing artifacts.

Project and pro studios can either use it as their main ProTools controller, or as a remote control to add extra transport and monitoring control, not to mention MIDI connections. Mobile rigs, or smaller post-production rooms will also be a natural niche for the command 8. Touch sensitive faders.

A sound designers dream. An Analog-modeled Synth with Automap! Novation has done a lot for the keyboard world. Their Nova and SuperNova synths are cult classics, and the innovative Automap technology made great strides toward simplifying MIDI setups. Now you can have both the power of an analog-modeled synth and Automap in one unit, known simply as UltraNova. Boasting wavetable synthesis, 14 filter types, six envelopes, a trio of LFOs, effects, and a whole lot more, UltraNova is a very powerful sound-creation tool. 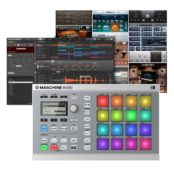 The Rolls RA53B is a 5-channel, 1/2 space, rackmountable stereo headphone amplifier featuring 1/4″ TRS and 1/8″ stereo mini simultaneous outputs for each channel. Two units may be linked for 10-channel, 6-insert operation, and a total of 3 channel inserts enable direct access to channels 1,2 and 3, potentially feeding 3 independent stereo mixes to those channels.

The Classic Series from Furman brings together superior protection and outstanding performance in a sturdy, rack-mountable design.

The Classic Series features Furman’s revolutionary Series Multi-Stage Protection (SMP), Linear Filtering Technology (LiFT), and Extreme Voltage Shutdown (EVS). Together, these technologies comprise what is, without question, one of the world’s most advanced and comprehensive transient voltage surge supressors.